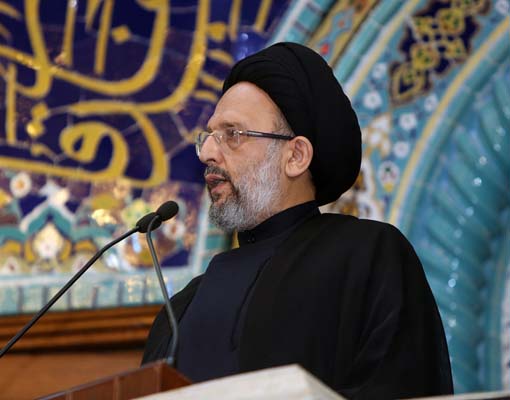 Allah, The Most Exalted, says in His Glorious Book: Allah intends only to remove from you the impurity [of sin], O people of the [Prophet’s] household, and to purify you with [extensive] purification.

Allah, The Most Exalted, speaks the truth.

On the seventh of the month of Safar, we commemorated the death anniversary of one of the people of this household that Allah, The Most Exalted, purified and made a security valve  to safeguard the believers against  falsehood and deviation and strife, Imam Al-Hassan Bin Ali (a.s.), the grandson of the Messenger (p.) and the Master of the Youth of Heaven.  This Imam was blessed, from his early childhood by the nurturing and guidance of the Prophet to the extent that he became the one who most resembles the Messenger in his morals, in addition to his features.  He was so much loved by Muhammad (p) that the Messenger said:  “ Al- Hassan is from me and I am from him”  . He also called Allah, The Most Exalted, to love him and love those who love him: O God I love him, so love him and love those who love him.

As we commemorate this anniversary we are going to highlight one of the traits and virtues that he was distinguished with (forbearance) so much so that he was known as the forbearing one of Ahl Al-Beit. This was due to the stage he lived in that demanded to be dealt with forbearance

This virtue was acknowledged even by one of his chief enemies, Marwan bin Al-Hakam, who chose to take part in Al-Hassan’s funeral because the Imam’s “forbearance weighed mountains”.

Forbearance, dear loved ones, means that one would control his temper when he is abused by others and would not act out of rage, thus giving himself a chance to think calmly and reach the right decision regarding how to respond. He would either forgive if it were wise to do so or answer back in the same way if this is the proper thing to do. Following are but examples of his forbearance:

It is narrated that a man from Syria, who was imbued with hatred and spite against the family of the Prophet, because of the deceit of Mu’awiya bin Abu-Sufyan, on seeing Imam Hasan (a.s.) emitted a series of curses to the imam as soon as he saw him!

The Imam did not interrupt him. Rather, when the Syrian had finished, the Imam approached him with a tender smile, and said:

On hearing these words, the Syrian broke into tears, and said: “I bear witness that you are the viceroy of Allah on the earth. Allah knows best whom to entrust His message with. You and your father were the most hateful creatures of Allah to me. But now you and your father are the most beloved from among all the creatures.

Another example of the Imam’s forbearance was demonstrated in his attitude towards some of his companions who opposed his decision to conclude peace with Muawiyah, because they did not understand its basis and goals. Some of them even described him as the one who disgraced the believers while others said that they wished that he had died on that day(the day the peace was concluded) and that they would have died with him. The Imam did not scold them, but opted to explain to them the reasons that made him hold this peace, which had to do with preserving Islam and the Muslim community, and which was in their interest as it sought to secure their safety.

A third example was when he asked his brother, Imam Al-Hussein to bury him beside the grave of his grandfather, the Messenger. But not to shed any blood if the Ummayad refused. And this was what happened as he was buried in Baqie’, near his grandmother’s grave, Fatima Bint Assad .

Dear loved ones: The Imam was capable in all these incidents, to retaliate and treat the offenders with the same cruelty they had treated him with. But he did not, and chose to act as a man who carries a message whose main concern is to add supporters to his cause, not to increase hatred and enmity.

We are in a dire need to emulate this Imam and all his virtues, especially his forbearance, to deal with the tensions that are caused by the offences of others, whether on the political or familial and sectarian domains. We have to count to ten or even a hundred, before we take any stance or make any decision, so that it would be a carefully studied and wise one. We all know the consequences that occur when tension and impulsiveness are unleashed … May Allah, The Most Exalted, give us the strength and the wisdom to be among the Hassanies in both our sayings and deeds.

Worshippers of Allah, The Most Exalted, I advise you and myself, with what Imam Al-Hassan advised us when he said : ’ Son of Adam! Abstain from the unlawful and you will be a worshipper, and be content with what Allah has predestined for you, you will be satisfied, be benevolent to those who take up proximity in your neighborhood, and you will be a Muslim. Befriend people in the same manner you would like them to befriend you, and you will be just. You have seen before you people who have accumulated a lot of wealth, without them caring if they got their wealth from Halal or Haram means, and built houses and had a lot of hope, but their buildings turned into ruins and their houses became graves. O’ Son of    Adam! Since the day you left your mother’s womb your life has been on the decrease. Therefore, avail yourself of that between your hands for the hereafter, because the believer takes provisions (from this world) and the disbeliever only takes his leisure (from this world).”

We are in a dire need to follow this advice and express our love to this Imam and his Household. And this is what the Imam explained in an answer to a man who said to him, ‘Verily I am one of your Shia’, ‘O Abdallah, if you are truly obedient to us in our commands and prohibitions, then you are telling the truth. But if not, then do not add to your sins by falsely claiming such a dignified position that you are not worthy of. Do not say, ‘I am one of your Shia’, but say rather, ‘I am one of your adherents and one of your lovers and an enemy to your enemies.’ You are good and aiming towards good.

When we become aware of this, we will be more aware, responsible and capable of confronting challenges.

We begin with Lebanon, where the Lebanese continue to suffer on the social, economic, political, health and services level. They fear that they will reach the fate  the highest official in the state warned from, if things remain the same  and the political parties do not shoulder their responsibilities in fixing what they themselves have ruined.

In the meantime, the internal complications- that are nourished by external ones- that face the formation of a government, which everybody is waiting for to save the country from its aggravating crises, are aggravating.

In this respect, we renew our call to all the concerned parties to make all efforts to remove the barriers that face the formation of this government through an objective and constructive dialogue that has the interests of the Lebanese in heart. This dialogue should be void of the rationale of seeking foreign support or excluding any  Lebanese party or constituent.

It has become clear that any government that does not take internal balance or the fears of various sects and influential political parties into consideration will not be able to survive or save the country and get on with reform. It will also make the country more vulnerable to external influences.

In this respect, we warn about the dangerousness of the sectarian rhetoric in political struggles, for this will negatively affect the internal sectarian relations and the civil peace and allow greater leeway for those who wish to inflame sectarian strife.

We want all those who are active in the field of politics, to refrain from using this rhetoric that nobody will benefit from, as all parties will lose, and  things will further  leading  the country  to “burn”.

At the same time, we want the religious leader to be aware to what they are driven at and not allow anybody   to turn the religion that came in the interests of people into a tool that serves partisan interests. In this respect, we would like to express our appreciation to all initiatives that aim to reduce the confessional and sectarian tensions and call for making more efforts in this direction. We also call on the media and the press, as well as the social media to play a unifying role that does not pour more fuel on the fire.

In this troubled atmosphere, the coronavirus infections are increasing, reaching a critical stage that calls for more awareness and vigilance, having become clear that the country cannot be totally locked down, since it cannot tolerate its economic consequences. Thus, we once more emphasize the need to abide by all safety and precautionary measures, and put the private hospitals on the alert and demand that government would give them the money it owes them to enable them to play their part.

On another level , demands to disarm the Resistance which liberated the country and continue to play a leading role in  deterring the enemy are reemerging, both from internal and external sources, and resorting to pretenses which we believe are not in the interest of the homeland,  especially that the enemy continues  its daily aggressions in land ,sea and air.

We call on the Lebanese to be aware and not to mix between the internal political struggle and the need to safeguard the points of strength Lebanon possesses that we in a dire need of until the Lebanese army, the main institution that shoulders the responsibility of defense,   becomes capable of defending the country.

Welcoming the month of Safar

Piety and the fear from Allah