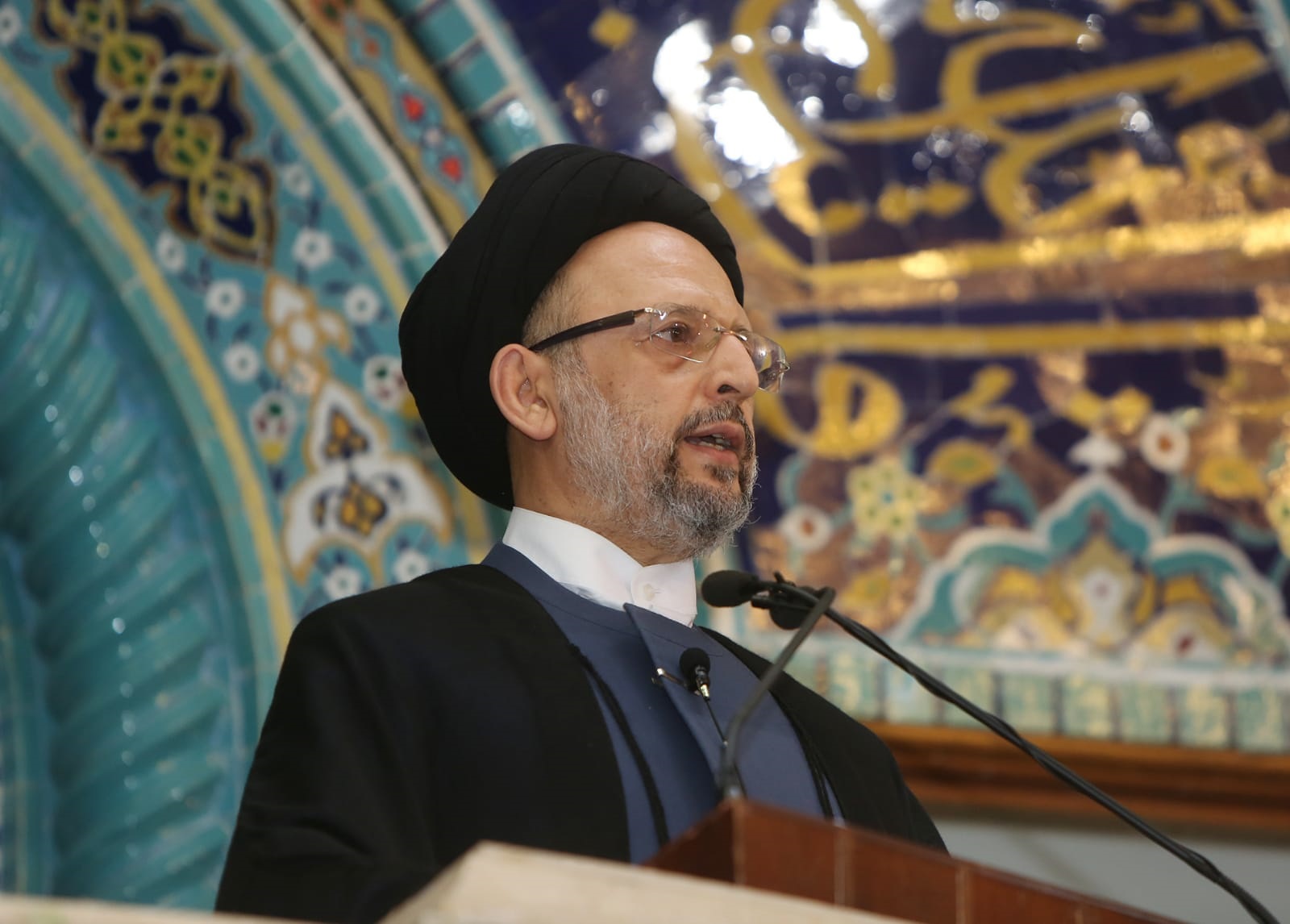 One of the Imams of Ahl el-Biet whom Allah, The Most Exalted, commanded us to love and be guided by is Imam Jafar bin Muhammad As-Sadiq whose death anniversary was on the 25th of the month of Shawal. This Imam was known for his piety, knowledge, forbearance, generosity, sublime morals, openness and readiness for dialogue…

He lived in an era in which the political circumstances enabled him to spread the knowledge and Hadiths of Ahl el-Beit, to the extent that the sect of Ahl el-Beit was called the Jafari sect. He lived in the era of the end of the Umayyad rule and the beginning of the Abbasid rule which made both parties preoccupied with other tasks. This made all religious students from all sects and from all Muslim countries seek to become his students, including the Imams of the most prominent Sunni schools. Abu Hanifa Anuran , the Imam of the Hanafi school says : were it not of the two years (he had spent as a student for the Imam )he would have perished . Imam Malik bin Anas, the Imam of the Maliki sect, says: No eye has ever seen, no ear has ever heard and no mind has ever thought of someone exceeding Ja’afar Bin Muhammad, As-Sadiq (a.s.), in worship, piety and knowledge.

Al-Hassan Bin Ali Al-Washa Al-Kufi, one of the narrators, said, while pointing to Al-Kufa Mosque: “I entered the Mosque 20 years after the death of As-Sadiq and saw 900 Sheikhs – the term “Sheikh” here refers to a person who teaches people – each saying: “Jaafar Bin Muhammad told me.”

Today, we are going to benefit from this occasion to shed the light on some of the Imam’s stances

Imam As- Sadiq (a.s.) gave a thousand dinars to his servant, Musadif, and told him, ‘Go to Egypt and merchandise with this money, because my family has largened.’ Musadif bought some goods with that money and traveled to Egypt along with the merchants. When they reached near a city in Egypt, a group of people welcomed them outside the city. The merchants asked about their goods and they were told that the goods were rare in the city. So the merchants promised each other to sell their goods twice the price they had bought.

They did so and returned to Medina with the profit they had earned. Musadif came to the Imam with two bags of money, each containing a thousand dinars. He told the Imam (a.s.), ‘One bag is the capital and the other is the profit.’ Imam (a.s.) said, ‘This is a good profit. How did you earn it?’ Musadif related the story to Imam As- Sadiq (a.s.). who (a.s.) stated, ‘Glory be to Allah! How did you make such a promise?’ Then he took one of the bags and said, ‘This is my original money and I do not need a profit earned in this way. O Musadif! Fighting with a sword is easier than earning halal sustenance. By this the Imam wanted to say to all traders and all those who seek to make profit that they should not strip themselves from any humanitarian or ethical considerations which should always be present in trade, just like any other part of life. It is the merchants’ right to benefit from their work, but this profit should not exceed a natural and balanced limit that does not hur those who are need for their goods or services.

The second stance: The Imam (a.s.) had a friend who was with him most of the time. They were walking in a market of shoemakers and there was a slave with the friend of the Imam (as) walking behind them. When the friend of the Imam looked behind, he could not find him. He looked behind three times, but could not see him. For the fourth time, he found him walking behind.

He shouted at him: “Where have you been, you son of the bitch?” The Imam raised his hand and hit his friend’s forehead and angrily said: “O my Allah! How come you curse his mother? I thought you have faith and Allah fearing, but I see that there is none in you.” The man said: “O my master! His mother is polytheist.” The Imam (a.s.) said: “Did not you know that every nation has its own rule for marriage? Now leave me!” They were apart and the man never walked with the Imam any more. The Imam (a.s.) ignored him until death separated them completely. By this stance, the Imam wanted to point out to the seriousness of insulting a person or accusing him of something he is innocent from, for Islam did not deem such an act permissible. The Quran says: And do not pursue that of which you have no knowledge. Indeed, the hearing, the sight and the heart – about all those [one] will be questioned.

The third stance: One of the companions of the Imam saw two people fighting. When he knew that they were fighting over some inheritance money, he gave them the sum and told them that the money he gave them was part of what the Imam left with him to solve such differences. The Imam wanted to explain to his followers that they ought to reconcile among those who differ, whether in the same house, village or town and whether this difference is political or religious, even if they have to pay some money or make extraordinary efforts.

Dear loved ones: These are some of the stances of the Imam that show how pious and humanitarian he was, and how concerned he was that no one would be falsely accused regardless of his social position, as well as his concern to solve any dispute in the society before it becomes too big to contain.

We are called upon to be guided by these stances and practice them in our community, for this is how we prove that we are loyal and faithful to this Imam…

Worshippers of Allah, The Most Exalted, I advise you and myself to follow the advice of Imam As-Sadiq to one of his companions, Ibn Jundab: “O son of Jundab! Every Muslim who know us, should judge himself every day and night. Whenever they find something good, they will try to increase it and whenever they find something bad, they will ask Allah’s forgiveness so as not to face the shame of the Resurrection Day. O son of Jundab! Call our fellow followers and tell them not to be busy with different sects. I swear by Allah that our kindness will not be due to anyone except with hard works and devoutness in the worldly life and with expressing sympathy with our brothers in creation. Those who are cruel will not be considered as our followers…

Let us follow the advice of this Imam by which we prove that we are loyal to him and become more active in the community we live in and more capable of facing challenges.

We begin by the very dear occasion to our heats: the Eid of resistance and liberation. This occasion reminds the Lebanese of their great achievement and the strength thy acquired when they were able to defeat the biggest power in the region and the army that created the illusion that they are invincible…

The Lebanese ought to be proud that there were in this country those who did not turn their back to an enemy that occupied their land and that wants to usurp their oil, water and other resources. They were aware that the enemy would not withdraw as a result of international resolutions, begging the super powers, or by surrendering to the Fait accompli it thought it had created.

On this occasion, we salute all those who gave the most precious things they have for their country and are still ready to sacrifice their lives…

We call on the Lebanese to memorize and never forget this date. They should not let anybody distort its image for partisan aims or accuse it of anything it is innocent of and hold it responsible for any consequences it had nothing to do with… A conscious nation is the nation that is proud of those who liberated its land and feels grateful for them and protects them from all who want to hurt them…especially that we face an enemy who is still threatening the country and its resources… as well as preparing itself through the maneuvers its undertaking on its borders for a new aggression…

We are well aware of the fears of some Lebanese and we do not deny them… that the arms of the Resistance might change its direction or destabilize the balance in this country. But the way to deal with these fears is not by ripping the country of the power that proved crucial for protecting the country and establishing a balance of deterrence with it. It is achieved by a dialogue that we call for to address these fears on the basis of being concerned for the country’s sovereignty and safeguarding it.

As with respect to the living conditions, that reached a level the Lebanese can no longer endure, after the skyrocketing rise in the price of the dollar in the black market, coupled by the rise in the prices of fuel, bread, and the cost of electric power and hospitalization, at a time the political impasse continues especially after the government is now a caretaking one and the fear that a new government will not be formed soon…

As we wonder about what led to this rise and what it aims at, we call for dealing with it and speeding up the all the processes of the forming of a new government and the elections of a new president, and removing any political or other barriers that stand in their way. The stage is not one of political struggles or scoring points. It is the stage of saving a nation that is no longer capable of withstanding the social hardships it is passing through or the security conditions which we are afraid might be destabilized and even undermined.

How to save ourselves in the Hereafter